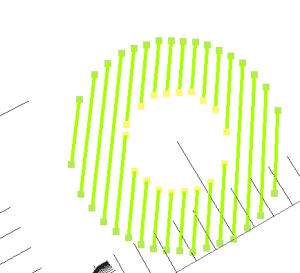 The intention of RapCAD is to provide a programmers IDE that will allow the user to not only model their ideas, but also prototype and manufacture those ideas. Initially the focus is to support additive machines like Reprap and Makerbot. However maybe people will want to use it one day for controlling subtractive machines such as CNC routers, or Laser cutters. To support this I wanted to add as much flexibility as I could to the process of converting the description of the model into GCODE instructions that will create the model.

The idea is to use a special type of RapCAD script called an .rcam script that will perform the slicing dicing and generate paths that will be used by the GCODE generation code.

Apart from the file name extention this script is only different from a standard RapCAD script by the definition of a module which must be called manufacture(), and a function which must be called layers(). The idea is that RapCAD will have all the modules needed for turning a primitive into a set of paths. The paths will then be sent to the GCODE generation routines. The most important module needed for turning a primitive into a path is the offset() module. In Fused Filament Fabrication, we have to shrink the shape by half the thickness of the filament, so that when the model is constructed it fills out to the correct size. A more obvious module is the slice() module, which is responsible for turning the three dimensional form into the two dimensional slices that are build up on top of each other during the printing process. In addition to others there will be an infill() module that given a two dimensional offset polygon will turn it into path roads ready for conversion to GCODE.

When RapCAD is asked to generate GCODE for the given design it first compiles and renders the description into a primitive and adds the result to a cache. The bounding box of the primitive is calculated and then the layers() function within the .rcam script is called to determine how many manufacturing cycles will need to be made. Then the manufacture module is called for each cycle, each time passing the full cached primitive and an incremented value accessible via the $layer variable.

RapCAD will come installed with a standard .rcam script designed for a reprap machine, but I hope that by giving people the flexibility to tweak the scripts, new and better ones will be written.

That’s the plan, now I just have to implement it!