Why is gravity so weak? Possibly because its the sub-dimensional effect of a much stronger super-symmetric hyper-force. Maybe its because gravity is mediated by closed strings whereas the other forces are mediated by open strings. Either way, as well as being extremely weak compared to the other fundamental forces its also extremely  unreliable. Sure we stay attached to the earth most of the time, but when it comes to holding things down like the Y Axis of my OverlapStrap you cant rely on it at all!

To resolve this problem I added some reinforcements to the Y-Chassis so that it is clamped down in much the same was as the X-Carriage. 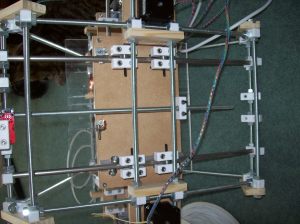 I had run out of alu angle, so I used fixit blocks instead, and also because it just illustrates a slightly different implementation of the same concept. I also got some scotch double sided tape as recommended and covered the acrylic bed with it. With these tweaks in place I was able to print belt-width-adjuster_1off.stl again, only this time I could remove it from the bed without breaking it.

The photo above is the bottom side that was attached to the bed, the top is pretty much the same quality as before. Then I got a bit more ambitious and decided to print something bigger belt-split-jig-bracket-universal_2off.stl 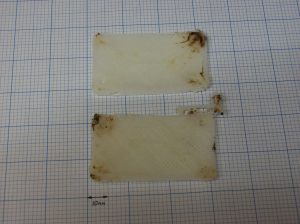 Sadly both of these failed. The problem this time is that being larger parts, they succumb to the effects of warping. The parts warped so much that the part came off the bed mid print, and the layers got completely misaligned. I have ordered the parts for a heated bed, and also ordered some PLA, as I understand warping is less of a problem with PLA.

Going back to smaller parts, my best print so far after alot of tinkering, and pain with reprap host came out much better than my first attempt.

On the left is the new print, and on the right is my first print for comparison. For reference, my settings I tweaked were:

There are a number of “features” in reprap host that make it confusing to use. So much so that most people seem to have given up on it and now recommend either using Skeinforge or Repsnapper.

Welcome to the future.

I was having trouble getting the first layer to stick so I mounted an acrylic bed. I had to move my Z end-stop up, so at the same time I mounted the Z end-stop on an adjustable riser, so that I could fine tune my Z offset.

With these two tweaks I was able to get a really good print of belt-width-adjuster_1off.stl

The trouble was that it stuck to the acrylic too well, and was near impossible to remove, in the process of removing it I completely wrecked the underside of the print.

I have been told that a good material to print onto is scotch blue tape, so I am going to try that next.

Well I haven’t posted for a while, because I have been working on my Decking. As well as that though I have been finishing off the OverlapStrap, since my last post I have made several improvements, such as beefing up the X-Carriage

Improving the way the Thermal Barrier was fixed to the CrudeStruder. I also added the finishing touches such as mounting the end stops, wiring up all the (pre-assembled) electronics, and general finishing off needed to test everything. 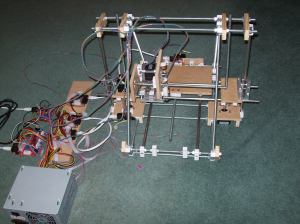 Then this weekend after a lot of tinkering and a lot of help from Tonokip via IRC, I was able to print my own derived version of Nopheads Mendel Pulley which I re-designed in openscad.

It looks pretty ugly, but I am quite pleased that its roughly resembles the pulley that I was aiming for. It did however need some cleaning up, this is what it looked like straight of of the printer. 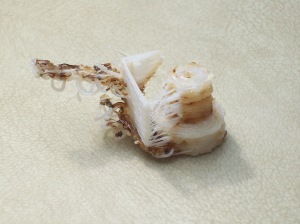 The problems I am having are