I haven’t posted for a while. Firstly because I took a three week holiday in Brazil and secondly because I have been very busy. Anyway before I left I had been looking at simpler way of making Adrian’s new extruder nozzle. Adrian’s design requires that you tap an M7 internal thread inside an 8mm brass bar, not only does M7 seem to be an non-standard size it also seems that you need quite good tolerances to get that right. Of course you also have the problem of getting an 0.5mm orifice in the end of the brass nozzle, and I had already decided that its near impossible to do this in any DIY setup. What I came up with initially was this design:

Instead of a one piece nozzle like Adrian’s design this design uses nozzles and barrels that can be readily bought from places like Makerbots, ReprapSource, and RepRapStores. I asked my Dad to turn the other parts on his lathe which he kindly did for me while I was on holiday. 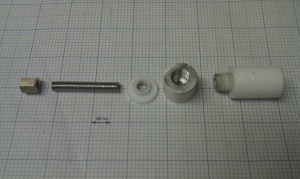 And here is a photo of the assembled nozzle, the retaining plate is not shown in this photo.

Unfortunately when my Dad made the PTFE insulator he mis-interpreted my drawing and tapped an M6 thread down the centre instead of a 3.5mm hole. When I got back from Holiday, my Dad was on his Holiday for three weeks, and so impatience prompted me to try to re-make it without using a lathe. What I did was buy some 10mm dia PTFE and put an external M10 thread on it

Then I drilled and tapped an internal M10 thread into a short piece of 16mm PTFE. I used a drill stand to do this, and I had to support the PTFE in a block of wood with an 16mm hole drilled into it. I screwed the 10mm PTFE into the 16mm PTFE and got my desired shape ready for drillng the 3.5mm hole down the centre.

This technique could be used as a simple method for making the same part in Adrian’s extruder nozzle, just use M7 instead. At this point I wondered (as you might be), why not just use the M10 threaded PTFE as the barrel instead of the above. Well I am not entirely sure how to answer that question, because that would of course be simpler, although I can say that the 16mm PTFE does have more structural rigidity than M10.

Update: I have since made some further improvements to this design which are documented here amongst other ideas.